We use ZOOM Advanced Power for in surgery tooth whitening, the number one whitening system in the world. Whitening is an easy, safe and effective way of improving the colour of your teeth. For Home whitening we use the Polanight system which is a syringe based system.

Before & After Teeth Whitening 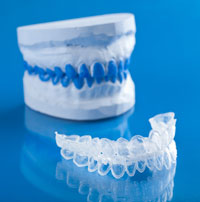 Home whitening – this involves taking imprints of your top and bottom teeth and these imprints are sent to the laboratory. They construct thin bleaching trays. These trays are supplied to you along with x6 6% Hydrogen peroxide gel syringes (Poladay). A drop of the Poladay gel is placed into each of the tooth compartments in the upper and lower trays and the trays are placed onto the teeth. After 5-6 hours the trays can be removed. One syringe is enough for roughly one day. So you should be able to do 6 days of tooth whitening. Photos are taken before and after and you will notice considerable improvements in the shade of your teeth over the week. If you want to go further with the level of whitening it is quite possible to purchase more of the Poladay gel syringes and thus the home whitening system is quite flexible because it allows you to control the level of whitening you want to do.

Poladay – That`s the full strength 6% hydrogen peroxide (equivalent to 19% Carbamide Peroxide) gel in the kits to help you get the maximum level of whitening possible. This level of peroxide is only available from a dental surgery and is not to be confused with the `over the counter` products sold in many high street pharmacies, which can only have a legal maximum of 0.1% hydrogen peroxide.

We use the world class leading system Zoom by Phillips at Egham Dental Care. The light activated process hugely accelerates the treatment in a single appointment at the dental practice. The whitening is not only amazing but also gentle on the gums and teeth.

Click here for more details about the treatment as well as patient suitability. 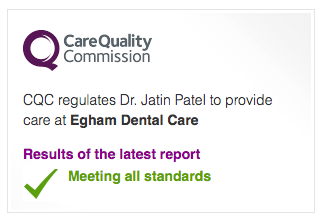 As well as emotional support and advice; We offer a wide range of services to help nervous patients feel relaxed during their treatment. Dr. Jatin Patel is Dental Phobia Certified.

Find out more or adjust your settings.

This website uses cookies so that we can provide you with the best user experience possible. Cookie information is stored in your browser and performs functions such as recognising you when you return to our website and helping our team to understand which sections of the website you find most interesting and useful.

Strictly Necessary Cookie should be enabled at all times so that we can save your preferences for cookie settings.

If you disable this cookie, we will not be able to save your preferences. This means that every time you visit this website you will need to enable or disable cookies again.